We are proud, after months of organizing and planning, to announce the launch of the Valleys Underground Movement, a non-party affiliated community organisation advocating:

The needs for Socialism in Wales

Almost a quarter of people in Wales live in poverty.

Valleys Underground promotes a truly Socialist Wales, and one in which the South Wales Valleys are no longer left to rot by both Westminster and the Welsh Assembly Labour Government.

Our organisation believes that the History of the United Kingdom is one of the Upper and Middle Classes versus the Working-Class.  It has been said that South Wales, in line with Marxist theory,  can be described as the world’s first ‘proletarian nation’, yet why is it that the Welsh Valleys consistently rank as some of the poorest regions in the UK?

Why is it that the Welsh Coalfield at one point produced up to 40% of British Coal Exports – totaling billions of pounds worth of revenue, yet our communities remained poor and underfunded?

Why is it that the South Wales Valleys are demonized as a place filled with ‘benefit scroungers’, when Billionaires are able to avoid multi-millions in their taxes?

Within the UK, there is a clear, harsh divide between the Rich and the Poor…and the poorest places in the UK are within the South Wales Valleys.  Some of the poorest in Europe, even.

The answer is that the Valleys, and Wales itself, has been drained of resources to line the pockets of big business.  When we advocate Socialism, we advocate a radical change to Wales, so that the next generation aren’t marred with poverty.

Taking much inspiration from the CPB’s ‘Britain’s Road to Socialism’, our organisation campaigns for, but are not limited to:

Ultimately, we believe that the best and most long-lasting way of Wales achieving true Socialism would be through an Independent Welsh Republic.

The United Kingdom is  the last remnant of the British Empire, and is barely a  constitutional crisis away from complete disintegration.

Westminster is inefficient, old and slow, with meaningful reform taking years to achieve any semblance of action. The system is composed of over 500 MPs, of which barely 50 are from Wales.  Westminster is the Parliament of the United Kingdom, but as English powers aren’t devolved, it is also the Parliament of England.  As a result, any future decisions made about the future of the UK are ultimately an English choice.

And as history has shown, the English choice is largely a Conservative one.   Whilst Wales, for better or for worse, has voted predominantly Labour for over a hundred years, Wales has been forced to endure the hardships consecutive Conservative governments  – ones decided upon by England,  have brought us.

If every single person in Wales were to vote Communist in the next general election, there would still be over 400 English MPs ready to outvote us.

Regardless of political party, this is institutionally undemocratic to the wishes of Welsh voters.

As the trajectory of Scotland and Northern Ireland is demonstrating, the break-up of the UK is almost inevitable.  If Wales doesn’t have a strong National movement by that time, and with so many of our powers still not devolved –  a predominantly English Parliament will decide Welsh powers.

In effect, Wales will be turned into the vassal state of the Kingdom of England.

Whether you like it or not,  (our team at Valleys Underground are Euro-sceptical at best), a lack of a widespread Left-wing campaign against the EU has meant it’s been adopted almost wholly by Far-right, English  parties – advocating a British Nationalism that would devastate small communities in Wales and pave a dangerous road for Wales.

We believe Leave voters coming from a Labour, Socialist background have been ignored, mistreated and labelled – all the while a Conservative Brexit has amplified the voices of right-wing English Nationalists.

For those across the Valleys who voted to exit the European Union, Wales would be in a situation far more perilous shackled to a rapidly disintegrating and an increasingly English-Nationalist Westminster than a Neo-Liberal Brussels.

Think of how often Wales is overlooked now, as it is.  We often rely on Scotland, or Labour in England to help us beat the Conservatives and right-wing in Parliament.  Without Scotland, we have to rely on the goodwill of English voters to decide our fate.

We believe that Independence is needed for Wales to enact a system of public ownership and socialism that will truly benefit all across the country. We believe that if we’re shackled to the corpse of the corrupt, aristocratic, elitist British state, we will eventually become another Cornwall – distinct in culture only, a haven for retirees whilst our young go anywhere else to work and live – away from the continuing poverty. 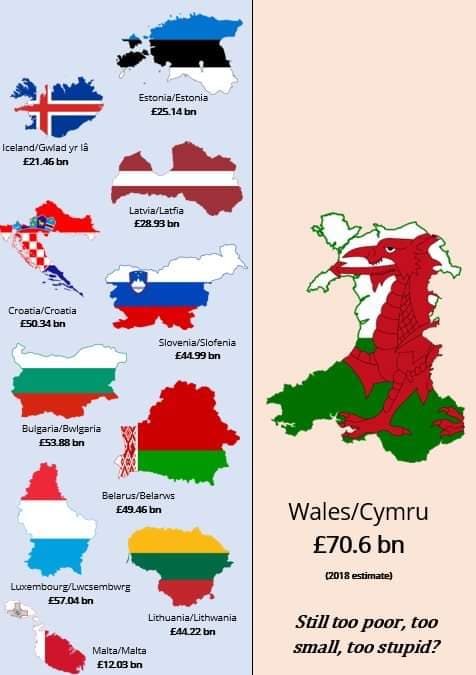 For those needing more of a reason to support a Socialist Republic of Wales – we suggest having a nose at:

All of this is well and good, but how is it going to happen?

We can’t just rely on electoral politics…we have for a century and it’s only gotten us so far.

Our main purpose is to advocate these aims and objectives across what we feel is a politically disengaged South Wales Valleys.

In order to implement our aims and objectives, and to take us off of a few dark pages on the Internet and into the world, we need to take direct action in our communities.

As previously mentioned in other articles, there’s only so much that can be done from behind a screen. For the majority of people across the Valleys, a Twitter argument or a Facebook post isn’t going to bring about social change – we need to do it in our towns and villages.

That’s why we advocate action – whether it’s litter-picking, sticker-bombing, trimming hedges, street-stalls, food-bank donations, repair works, workshops, charity drives, we believe that people need to physically see how our programme can help them, rather than it staying in the abstract.

Our movement’s place in Wales

We take great inspiration from the work of groups such as the Connolly Youth Movement, who combine leftist politics with a radical approach to direct community engagement.

Although we support the work of Undod in promoting Welsh Socialist Republicanism,  and the YesCymru movement in supporting Independence – we have a specific focus…Advancing a Socialist idea of Independence in the neglected South Wales Valleys through Direct Community action.

For years, the South Wales Valleys were ripe with radicalism, with socialism, and even with Welsh Republicanism.  Communities worked together.  Cohesion and Solidarity were part of daily life.

We can have that again,  but we need to fight for it.

For more information on our upcoming activities,  please Contact us!